Singing in the Streets

On Saturday, I heard a celebration. It was around 11am, and I was throwing some recording equipment into my car before an interview I was scheduled to record in Milwaukee. Earlier that morning, I took my kid on a walk in a nearby park where there was some kind of youth 5K happening: parents running alongside their kids, everyone wearing the same T-shirt, that kind of thing. So when I first heard this cheering, I assumed it was for the stragglers—that final, determined group of runners trying to will themselves across the finish line.

It was only when I was halfway to Milwaukee, my phone exploding with text messages, that it hit me: those people were cheering because Joe Biden was going to be the next president of the United States. Four days after the election, already in the midst of petty and baseless lawsuits, the papers had decided to call it. Biden had the electoral votes he needed to take office in January.

After a summer where protests against police violence were met with more police violence, where most concerts and social gatherings were either cancelled or cast in a pall, where sporting events were played for no one, the very idea of spontaneous, public celebration seemed unthinkable. But here people were, in Madison, Wisconsin, taking to the streets and shouting. If not for joy, or hope, then at least for relief. 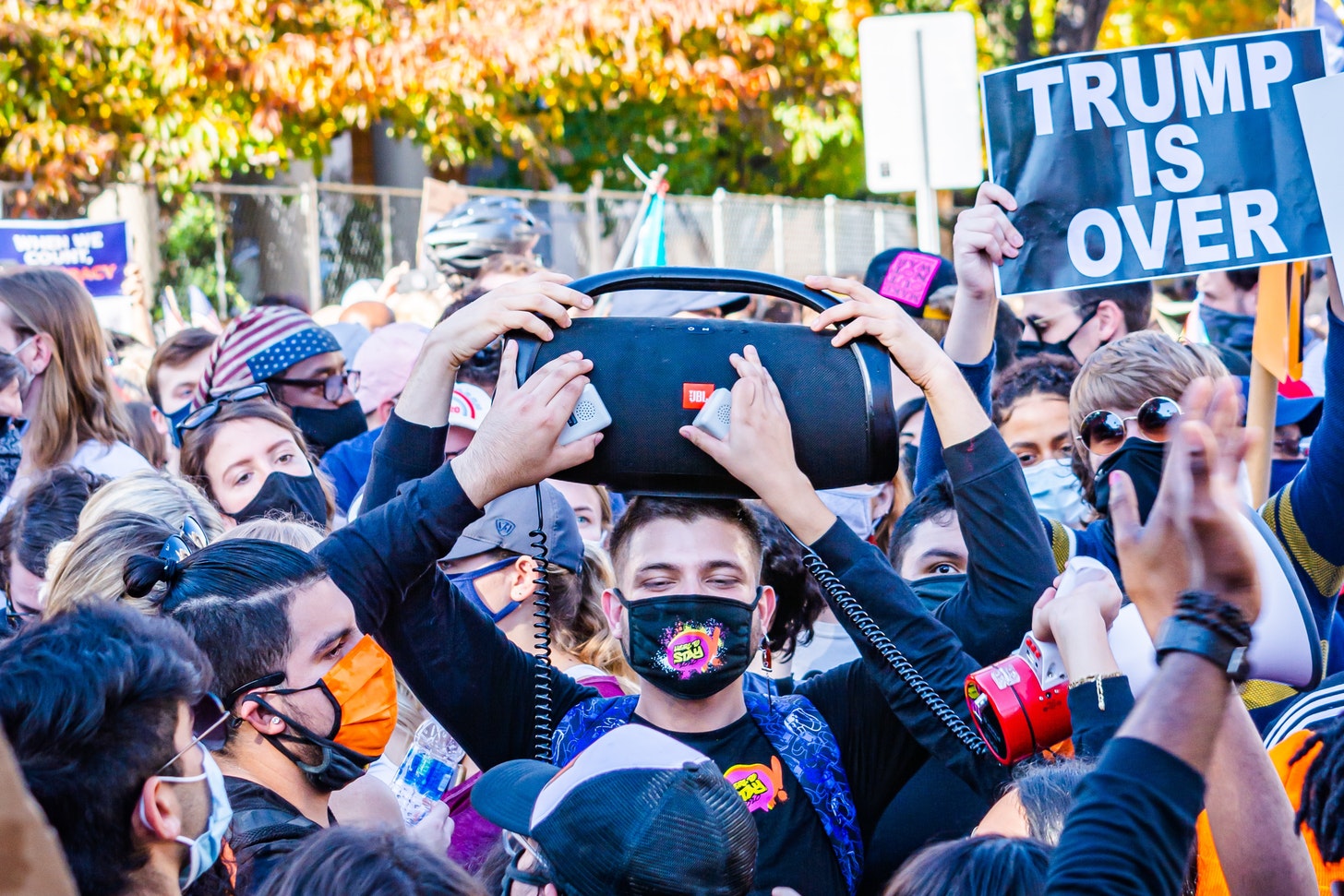 So much of our sonic lives is packaged in the form of media—which is to say, it comes to us prerecorded, mixed, mastered. It has been assembled for us. But mass gatherings of people explode that kind of sonic control. They shout and chant and drum and sing. Even when prerecorded music is part of it, it takes on a new energy, as city streets, like dance floors, deepen and complicate and enrich our musical experiences. This is a very long way of saying that right now, for me, there is no more beautiful music than this:

It’s fitting, of course, that singing and dancing serve as a release from what must be one of the most philistine presidents ever, a man who couldn’t—or wouldn’t—attend the Kennedy Center Honors because no living artist would be able to hold their tongue against his ineptitude.

For whatever Biden might or might not be policy-wise, I at least expect him to return some—oh geez I’m gonna say it—dignity to our highest office. When I “miss” Barack Obama from time to time, I don’t miss extrajudicial drone killings, of course. I miss a person who could show empathy, who could demonstrate that he read books and listened to music and could show up at a funeral and deliver a eulogy and sing “Amazing Grace.”

That moment has been on my mind recently because of a song that memorializes it, “The President Sang Amazing Grace.” It was originally written in 2017 by folk singer Zoe Mulford, then covered the next year by Joan Baez. But I hadn’t heard it until last month, when it showed up on a new Kronos Quartet record being sung by Meklit Hadero.

It’s a thoughtful, moving song, out now on Folkways, and it gives me some hope that we can get back to having a president who is worth singing about. (And to hear more about Meklit, and how Ethiopia and Ethio-jazz have shaped her as an artist, check out this interview.)

Elsewhere around the internet, a few things worth spending some time with:

👂Tomorrow, the Midwest Society of Acoustic Ecology (MSAE) is launching a new series of virtual soundwalks that will debut at 5pm on their YouTube channel. MSAE has been partnering with the Chicago Parks District for several years on a series of artist-led soundwalks that happen around the city in the summer. This summer, budget cuts forced them to scale down the program even as the teaching artists worked harder to produce online versions of their walks. If you want to join me in supporting this work—I’m a board member of the MSAE, and it’s a great org—you can give few bucks to their GoFundMe campaign.

🚶‍♂️If you want to take a soundwalk around another city, why not Florence? This is a sound map project that started in 2017 in order to “give a realistic sonic picture of the everyday Florence.” Listen here.

🎧 I updated the Field Mix last month with ten fresh tracks from the likes of Mary Lattimore, Sam Prekop, Kelsey Lu, and The Japanese House. You can listen on Spotify or Apple Music, and the entire mix archive—now over 5 hours long—is on Spotify.

🎵 Thanks to Matthew Schipper of the Deep Voices newsletter (highly recommended), I learned about “Icy Lake,” a mid-90s club hit based around a cheeky yet unsettling answering machine sample. It’s worth spending 12 minutes to watch this documentary about the track, which was popular in the NYC drag and vogue scene.

💾 Back in August, Jenzia Burgos published the Black Music History Library, an online archive filled with resources on Black music organized by genre. I just found out about it, but it looks like a great resource.

🤫 I’m almost certainly going to write more about this in another newsletter, but yes, silence is a tool of exclusion in experimental music discourse and spaces.

The sound art scene idolizing silence in order to participate within it makes it more clear why they celebrate Cage’s 4’33 so much. Silence allows abusers to continue. Speak up & you’re trouble/ uneducated in silence. They flaunt artistic silence as covert intimidation.