Jazz Migrations out today on TTBOOK 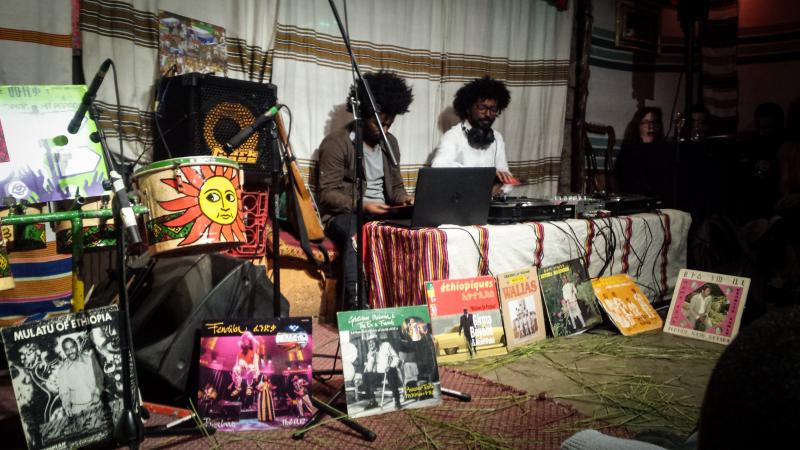 The story of jazz is a story of migrations: the transatlantic slave trade, the Great Migration, the exile of South African musicians during Apartheid. Many of these migrations, of course, were forced—part of the colonialist and capitalist projects that relied on people as property or defined them as being less than human. People carried music with them as they went, and much of this music is African in origin. It includes jazz, but is by no means limited to it—in fact, much of what we think of as popular music in the United States no longer points back to European musical traditions, but African ones. As Ron Radano has argued, “we are all African when we listen.”

Even though you won’t hear my voice in it, I co-produced the most recent episode of To the Best of Our Knowledge (TTBOOK) with Anne Strainchamps and Sara Guyer. The episode is a collaboration between their two respective organizations, TTBOOK and the Consortium of Humanities Centers and Institutes (CHCI). You can listen right here or you can find the show on the TTBOOK website or in your podcast app of choice.

Those organizations have a history of collaboration, but they also have another thing in common: I used to work for both of them. So while I hope you’ll enjoy this episode on its own merits, I also wanted to share the backstory to this collaboration—which, if things go well, should last until at least 2024…!

Six years ago, I moved to Wisconsin for a job at To the Best of Our Knowledge. It was a major leap for me in two ways. For starters, it was my fourth geographical move in three years (part of the early-career-academic hustle), but more importantly, it was a move away from that academic career into the world of public radio. It wasn’t too much of a stretch, of course; I had been studying the history of sound and sound recording technologies and also taking classes in audio production. I knew some history, I also knew Pro Tools. It was a logical fit.

Those two years at TTBOOK were eye- and ear-opening. I met some amazing people, heard some amazing stories, and saw the amazing work required to make a weekly radio show. I also saw the less-than-amazing bureaucracy that keeps a large machine like Wisconsin Public Radio running year-to-year.

When my two-year contract was up, the right job for me didn’t exist at WPR, so I moved back into academic work, sort of. I joined the staff at the UW–Madison Center for the Humanities. This work felt meaningful, and exciting, and also a little bit familiar—I was running the programs and dishing out the small grants that were very much like the programs and small grants I got as a grad student. Soon, due to some organizational reshuffling, I found myself working for the CHCI, a global network of humanities centers. That job was also great, in different ways, but in a classic case of “the grass is always greener,” I decided I missed radio. So I left that job and started freelancing. That was two years ago.

Before I left, the idea for doing some collaborative humanities projects with TTBOOK had been discussed at CHCI, and in fact, the Center for the Humanities was already regularly contributing guests to the show. But the idea was something on a bigger scale, a series of shows around some of the academic projects and ideas that CHCI was developing, many of them outside of the United States. Everyone agreed that we needed to bring some of these international perspectives to bear on the current issues facing so many across the globe: the rise of populism and the crises facing democracy, global climate change, efforts at “decolonizing” university systems, and rethinking the entire project of teaching and academic knowledge production. Not coincidentally, many of these topics are the ones currently being explored in CHCI’s Global Humanities Institutes.

Thanks to Steve Paulson and Anne Strainchamps and the whole staff at TTBOOK, we’re able to share these ideas in a much less academic context and expand the scope of people involved to include the artists and thinkers and writers whose interviews have long been the backbone of TTBOOK. I’m honored to be a co-producer / editor / writer / wearer-of-many-hats on this collaboration. We’re hoping to do several episodes a year for the next several years thanks to a grant from the Mellon Foundation.

These episodes will be trickling out periodically on TTBOOK and then will be bundled into podcast miniseries at the end of the year. “Jazz Migrations” is from the first series, which we’re calling Voices from Africa. The material is inspired by a conference held in Addis Ababa last year, but also expands well beyond that. I’d love to know what you think—you can find me over on Twitter.